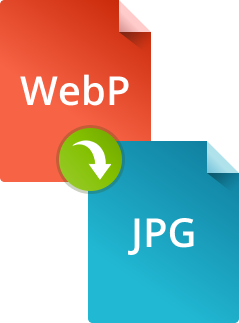 Want to convert WebP to JPG?

How to Convert WebP to JPG

WebP is a relatively new image format developed by Google. As the name implies, it was initially created for use mostly on the internet. Compared with JPEG (JPG), WebP promises to deliver 30% smaller files but with almost the same quality. It’s also capable of playing animations and delivers up to 60% smaller GIF files. However, no matter how revolutionary this new format may seem, it still has challenges. Not all web browsers fully support WebP yet, which may lead to unexpected results if you publish these files on your website. WebP is of course supported by Google Chrome (including the Android version) but is not yet supported by Safari (including the iOS version). Another issue with this format is that, when saved in a lossy mode, the picture may appear more blurred than JPG, especially if you zoom in.

So, if you have some WebP pictures you want to use on your website or transfer to your phone or other device, it would be a good idea to convert them to a more universally supported image format, like JPG. To do this easily, use Movavi Video Converter.

How to Use Movavi’s WebP-to-JPG Converter

Despite being mainly a video converter, this powerful software also supports all popular image and audio formats, and with the help of batch conversion, your multiple images can be converted in no time. To learn how to easily convert WebP to JPG, simply download the Windows or Mac version of the program and follow our instructions below.

Click the Add Media button, then Add Images and choose the WebP image(s) you want to convert. In the Images section, choose the appropriate format for your purposes – in this case JPG. 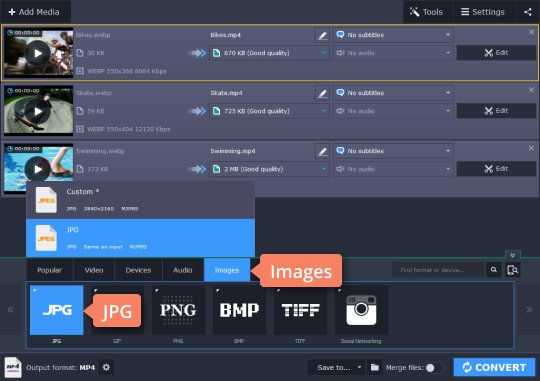 Click the Folder button to choose the folder where the converted files will be saved. Click Convert to start the process. After the conversion is complete, the output folder will open automatically. Now you know how to use Movavi’s WebP-to-JPG converter. 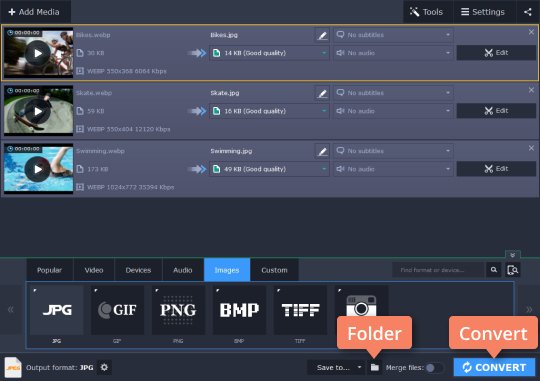 JPG is a universal image format that is today supported by almost all devices and is used to store graphic data for any possible use, from high-res photographs to small website elements. JPG is widely used on the internet because of its relatively small file size and decent quality. However, WebP has even more to offer in terms of size and compression. So let’s have a look at the comparison table below to see the pros and cons of each format.