When you watch a movie, the video was recorded at a certain speed; hence, you can view it without it moving too fast or too slow. However, a little tweak can be done to increase the movie recording speed more so that you can watch the movie at a faster rate. When you do this tweaking, the movie is called time-lapse video, and the technology used is referred to as time-lapse video apps.

Some apps can perform a time-lapse function. We have prepared the seven best time-lapse video apps for Android and iPhone.

Movavi Clips is one of the best time-lapse photography apps in the year 2020. Movavi Clips runs with no ads. Hence you do not have to be concern about unwanted ads interruption or disturbances. It also gives you the chance to merge and edit photos using its multiple editing tools. Are you looking for a time-lapse app that can allow you to do color enhancement, add sound effect as well as give you a high-resolution photo quality? You are on the right track with the choice of Movavi Clips.

This time-lapse photos app also enables you to readjust and correct errors made during the recording of the video. You can change the direction of the photo content in the video by rotating it. Either you want to speed up your movie or create a slow-motion, whatever your choice is, the moviemaker movie clips get you covered.

To learn how to create a time-lapse video on your computer, check the link provided below.

How to make a time-lapse video on PC Processing and editing videos and photos 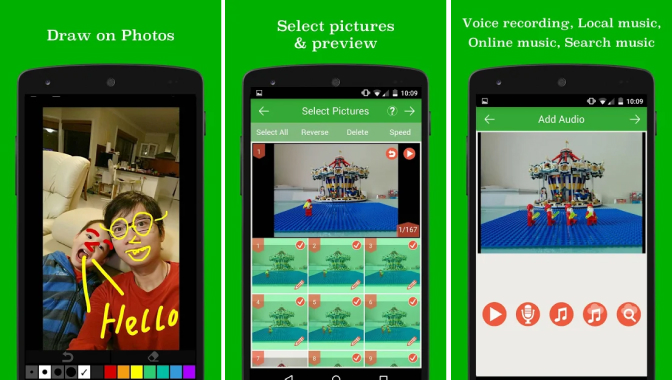 The PicPac Stop Motion & Time Lapse is one of the best time-lapse video apps that can also be used as a time-lapse photo app. This photo editing technology is user-friendly. It requires no advanced skill to make use of it for editing photos on any of your mobile phones. The app runs with no ad disturbances, and it's one of the best time-lapse video apps you can consider for Android. It gives you the chance to shoot high-resolution video quality (1080p). You also have the opportunity of drawing on your video content to create an incredible slow-motion video or an illusion of a fast one.

The PicPac Stop Motion & Time Lapse come in two versions. The free and the pro version that comes with premium value. As expected, the pro version comes with additional features that are absent on the free version. A few of these astonishing features include the ability to duplicate and merge different existing projects as well as the ability to remove a watermark. You can also use your logo at the end of the video.

There are few dark areas such as its price. The time-lapse photo app is moderately expensive and not for low budget. Also, the manufacturers need to consider the option of making it possible for their users to add sound effect as there is no feature as such presently. 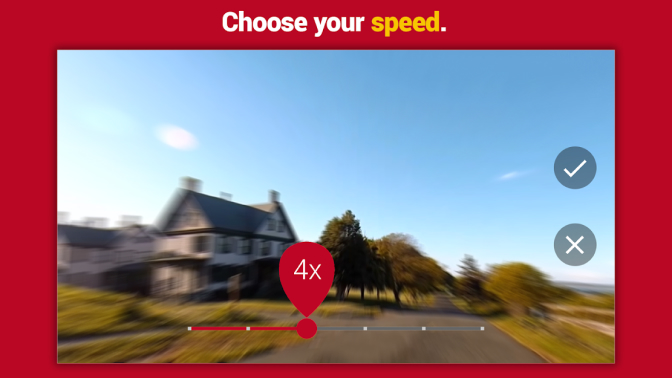 Microsoft is a household name when it comes to technology. You probably wouldn't expect anything short of superb from them. The app is also free, although it has limited features. You can be sure of enjoying your mobile video editing without any ad disturbances. Also, there are no bugs. This time-lapse photography app is user-friendly; require no particular skill to get started once you launch it. While recording, you can regulate the speed of recording as well as choose a variety of photo resolutions for your video recording.

Since it's coming at no price, there are a few grey areas that could pose some issues such as the unremovable watermark. 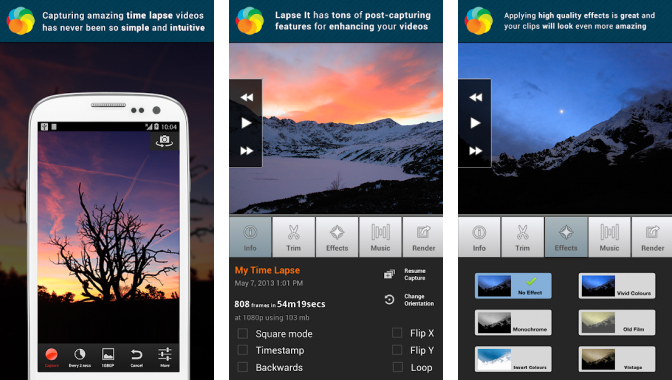 The first good news is that either you are using an Android or an iPhone, Lapse it get you covered. The time-lapse video app has several features that give you nothing but thrilling sensation. You can make a slow-motion video at 240x speed as well as get a high-quality image at 1080p. Unlike some apps that do not permit the addition of sound effect, Lapse It enables you to add audio from its gallery. You can also import your already captured video and edit it to your desired taste. You have the editing tools such as white balance, focus, scene modes, exposure at your disposal. You can make your time-lapse video while you can also share it directly on your social media account. This time-lapse video app is for iPhone users. It has one of the easiest and best user interface; hence, it is user-friendly. You can also add your desired audio effect and adjust the speed and quality of the video. You can also record new photos and do some superb framing editing. After editing, you can export to your camera roll or share on your Instagram account.

This app gets a place on our top 2020 time-lapse photo apps because of its unique features. Some of the features include tilt-shift (no other app offers this), amartorka, sketch. You can also record a whooping sum of 4000 videos with this app. Isn't that amazing? 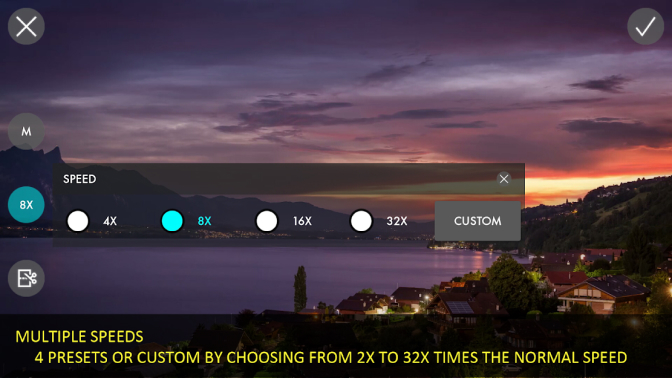 Time Lapse Video Editing Pro gives you freedom like no other. It gives you the chance to trim your video content before creating your time-lapse video. You can save this video on your mobile phone after editing and then share it with your loved ones such as family, friends, spouse. You have multiple options of shooting video at four speeds to create a slow-motion or time-lapse video. All these are in addition to the fact that you do not have to worry about the watermark. With just a click, you can share with the digital world on your social media account.

This app is one of the best time-lapse video apps for iPhone users. It is compatible with iOS 8.3 downward. The free version is similar to the pro version in features although there is a reduction in the number of videos you can record. However, it is a time-lapse app you'll fall in love with it. It enables you to regulate the speed and image quality. You can also do some framing editing. However, the features on this free version are no match for the pro version.

There are no perfect photo or video without some element of creative editing. Although manufacturers are continually working on updating phone cameras, this isn't enough. You may need to install any of the seven best time-lapse photo apps to get your desired taste. Although some come at no cost, others come at a premium cost. We recommend you to try Movavi Clips to create the perfect time-lapse video on your phone.

Processing and editing videos and photos