Looking for a Bandicam review?

Read this article and learn why you should
try the Movavi software instead:

Bandicam by Bandisoft is a fairly popular screencasting tool. Not among Mac users, though, as there’s no version for their system. As for the Windows version, it lacks some key features offered by other publishers at a more reasonable price. So before wondering how to get Bandicam, it’s probably worth it to check out the alternatives. For instance, there’s Movavi Screen Recorder Studio – it has most of Bandicam’s recording options as well as a built-in video editing tool, and it’s available for both PC and Mac users.

To help you decide whether to go for Bandicam or download Movavi, we’ll compare them based on the following criteria:

Both screen recorders have an intuitive, sleek-looking interface with a conspicuous REC button and a minimum of settings. Hardly anyone, no matter how inexperienced they may be, would find it difficult to navigate through either of these apps.

When it comes to recording functions, both programs also shine – they enable you to capture webcam and Skype sessions, grab online videos (including in HD), record sound, as well as make software tutorials and demos. Here’s a more detailed comparison of the recording features:

Most features are quite similar. However, Movavi Screen Recorder Studio also offers the option to record video and audio from different sources as individual tracks. This may be helpful, say, if you want to capture your desktop and webcam and then edit them separately. And if you’re thinking about how to record your voice when editing your captured video, you’ll do better with Screen Recorder Studio because Bandicam doesn’t have this capability.

Let’s see how the programs fare in terms of editing captured footage to make it look professional. If you’re using Bandicam, you have no such option in the base program. To get access to at least some editing tools, you have to buy and install an additional app called BandiCut from Bandisoft’s official site. With Movavi Screen Recorder Studio, a video editor is included in the package to provide all the essential editing functions you might need. The table below shows the details for both products:

As you can see, the options in BandiCut are restricted to splitting and cutting your videos, whereas Movavi Screen Recorder Studio offers a whole range of features. With the latter, you can edit your screencasts by adding music, inserting various special effects, transitions, and titles, and much more.

Now let’s have a look at the formats and export options in both apps. 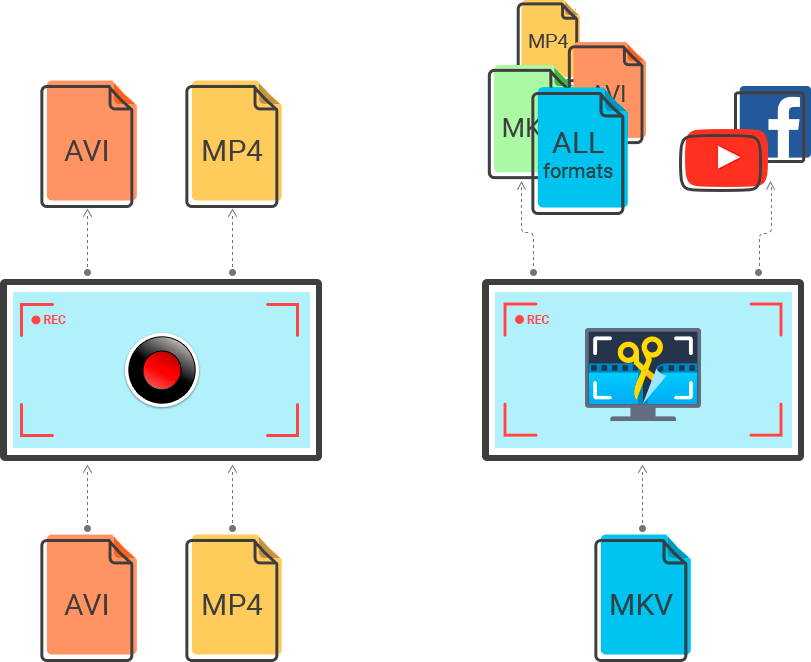 The formats offered for recording are very different: AVI and MP4 in the case of Bandicam and MKV if you use Screen Recorder Studio. However, the latter program works with multiple formats and codecs, enabling you to export your screencasts in the format that best suits your needs for any mobile device: AVI, MP4, MOV, WMV, FLV, 3GP – the list goes on.

If you want to share the resulting videos on Facebook, YouTube, or Amazon’s S3 cloud storage service, you can do it directly from the Movavi software. Bandicam has no such feature.

The level of support users get also plays a significant role in deciding on purchasing software. In this respect, the difference between Bandisoft and Movavi is less pronounced:

Both Bandisoft and Movavi websites provide numerous video tutorials on different functions of the programs that receive regular updates and expansions. Bandisoft even has guides explaining how to use Bandicam to record audio and video footage from specific games like Minecraft and Grand Theft Auto.

However, Movavi hosts a more extensive collection of manuals and how-tos detailing every step a user needs to take in Screen Recorder Studio to achieve the desired effect. Also, the live chat service set up by Movavi helps users to solve problems even more quickly – a feature that is absent from the Bandisoft site.

If you’re mostly interested in making gameplay videos, Bandicam is a good enough choice. If recording games is not what you’re after, you should probably consider Movavi Screen Recorder Studio, which allows you to:

Just download the Screen Recorder Studio installer, launch the program, and discover all its extensive features.